I am back from my month-long writing fellowship at Hawthornden Castle, Edinburgh. Well, I've been back a fortnight but I've been busy with work (after a month away from the day job I suppose I have to do *some*). I had a great time - a really great time. I wrote like a demon, ate lots of lovely food and met five nice new writer friends... all in all, a wonderful, memorable experience.

In a little more detail... I travelled by train to Edinburgh on a Saturday in mid-March with a huge suitcase (yes, I took far too much) and was picked up at the station by the castle administrator, who also happens to be a poet, Hamish Robinson - a lovely and very funny human being indeed. A couple of the writers had already arrived the day before after flying in from the US, so after collecting me there were a couple more to pick up before we made our way to the castle. 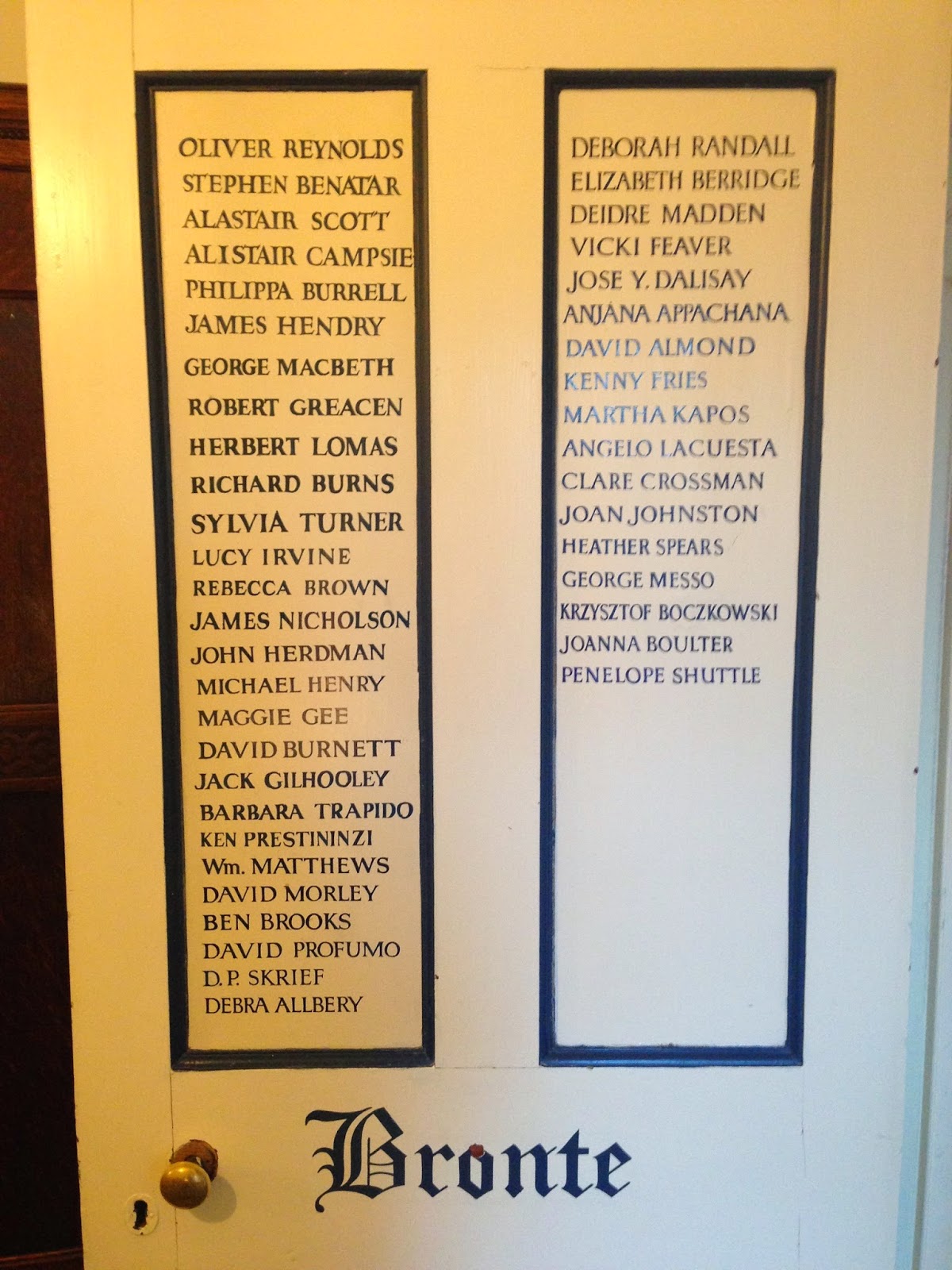 On the journey we chatted generally and spoke a little about our works-in-progress (we were all there to work on novels). After half an hour or so, we were turning into the rather impressive - and beautiful - tree-lined drive at the castle (a 15th/16th century building, which was once the home of the poet William Drummond). When we got out we lugged our cases and bags inside and were shown up to the writers' floor (up a rather narrow, spiral stone staircase) and then to our rooms - all of which are named after writers and have the names of writers who have stayed there on the door (not everyone gets on the door - you have to have a book published you worked on while you were there). I was, rather aptly, given Bronte - a lovely room with everything I needed including a desk from which I had a view of the castle roof and a little bit of sky. Perfect, as there's nothing I like better than writing and then looking up at clouds or stars when I'm thinking about things. After unpacking, it was almost time to meet everyone for sherry and dinner. Part of the excitement of going was not knowing who I was going to be spending a month with. Therefore, it was nice to finally meet the other five properly: US writers Andrea Smith and Drew Larimore, Singaporean writer Cheryl Lu-Lien Tan, Ukrainian writer Julia Kissina and Bulgarian writer Alek Popov - a great group of people as I was to discover over the month. We ate a rather lovely meal with haddock soufflé for starters, haggis and vegetables, followed by cheese and biscuits. Then we went to the drawing room after to carry on finding out about each other before we gradually all disappeared to bed.

After that first night, the days gradually found their own rhythm. I would get up and go down to the hearth room for breakfast (porridge in a pewter pot was my favourite), sometimes chatting to the others at the long wooden table if they were up and about. After breakfast I would go back to my room and do a little bit of reading before starting to write. I soon found out why Hawthornden is such a special place - the peace and quiet, the sense of calm; it is perfect if you need to concentrate on something as big and unwieldy as a
novel. Having no distractions meant I could just lose myself in the world of the novel. Bliss. There's no cooking to do - all your meals are provided for you by cook extraordinaire Ruth Shannon, including lunch in a basket, which is brought to your room; there's no washing up to do, no cleaning: the lovely housekeepers Mary and Georgina even do your laundry for
you. There really are no distractions and no excuses not to write. So, during the month I either worked in my room - which I loved - or a couple of times I went to the library, which is in the grounds but in a separate, purpose-built building. It's a lovely, quiet space with a number of rooms with tables and shelves filled with books, a lot of which are signed (among the ones I spotted were plays signed by Arthur Miller and Harold Pinter). If I was tired or needed to stretch my legs, I would go on one of the walks near the castle - my favourite of which was the Castle Walk, which is a circular route of about twenty minutes or so: a beautiful walk near the River Esk with trees and mossy paths underfoot. I found the walk really refreshing, especially if I was struggling with my work, which happened every now and again. After a day of writing and solitude, it was lovely to meet up with the other writers for dinner in the evening and chat over some of the most delicious food I've ever had (some of the dishes included scallop chowder, prawn and mushroom risotto, plum and marzipan pie, apple crumble, amongst others - although the star of the show was Ruth's fish pie: heavenly. It's well worth getting hold of her cookbook here if you fancy giving some of her recipes a try).

I only left the castle and its grounds to visit nearby Rosslyn Chapel (of Da Vinci Code fame) and to
go into Edinburgh a couple of times and it was nice to do that after a couple of weeks of intense rewriting. Over the month I managed to edit/rewrite half of my novel - so around 30,000 words - and I certainly feel as if it's in much better shape than it was when I went. It was great to be away from the internet, television - all those little things that drag on your attention and take you away from your work.

I'm hugely grateful to the fellowship founder and owner of the castle, Mrs Drue Heinz, and the application committee for inviting me along... as well as to Hamish, Mary, Georgina and Ruth for looking after us all so well. Unfortunately you can't apply for another five years after you've been but I'd certainly love to go again if I'm able to: Hawthornden gives you a room of your own and much, much more.