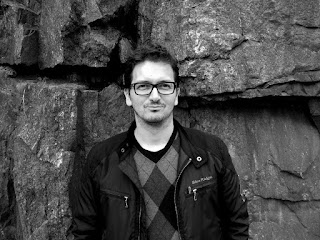 Adnan Mahmutović is a Bosnian-Swedish author and lecturer in English literature. He became a refugee of war in 1993 and has since written on the myths of home. I first got to know Adnan when we were in the same online writing group together - we were then both shortlisted for the 2011 Willesden Herald Short Story Competition. His stories have appeared in a range of journals including Stand, The Battered Suitcase and many more. His short story 'Gusul' was made into a short film by Artwerk in 2010 (you can watch it here). His novel Thinner than a Hair was the winning entry in the First-Novel competition run by Cinnamon Press. His short story collection How to Fare Well and Stay Fair - which I have just read and mightily enjoyed - was published by Salt last year. Here I interview him about the collection.


AJ: The collection mainly focuses on the experiences of refugees who have escaped war-torn Bosnia and settled in Sweden. Did you draw on your own experiences as a refugee for the stories?

AM: Yes, but also things people have shared with me. Sometimes, when I just listen, I find people will tell me amazing, often intimate things.

AJ: The first lines of the story 'Myth of the Smell' are ‘Sometimes I think the only real home for a refugee is an endless road. In second place, I don't know, maybe a bus.’ Can you talk a little about notions of home with regard to the characters?
AM: Early on I understood that “home” was a mobile thing. So my characters are often moving, even when they’re not doing any physical movement. Some are terribly nostalgic and romantic. Some find that home is what they carry with them. But they all build their character in relation to the notion of home. In the beginning, when you first become a refugee, things tend to go from being familiar and intimate to being notions you can’t quite understand. To be at home, to find home, for me, is to go back from this preoccupation with notions and definitions to the mundane, lived experiences, however small. That’s why the character Almasa finds home in those real moments of connection, as for instance in 'First Day of Night' where she meets all the different people and somehow, despite everything, connects with them, on some level.

AJ: I was particularly interested in the fact that a lot of your stories focus on female perspectives - Almasa, for instance, is a recurring character. The book also seems to genuinely celebrate the female experience (I particularly love the idea expressed in 'Integration Under The Midnight Sun' which mentions the Bosnian myth that ‘every corner of a house sings when a daughter is born in it’.) What was it about the female experience that attracted you?
AM: I was particularly drawn to things women tended to talk about. During the war gender roles were being ossified and turned into things I couldn’t quite recognize. This continued once we escaped war. I was personally disappointed with the ways men behaved during war, and impressed by the incredibly creative ways in which women dealt with horrors.

Most men I’ve met over the years always wanted to analyze and intellectualize things as a way of maintaining their identity. I found women to be more relaxed in their storytelling, and more oriented to small but infinitely significant details, like the things they say to each other in 'Integration'. This for me is a more important part of history than dates and numbers. When I started studying philosophy and literary theory I found those peculiar little stories a great antidote to the discourses I was engaged with. The story 'Gusul', for instance, started with an image of a woman warming up her mother’s feet by pressing them against her naked belly. Things like that, these raw intimacies tend to stay with me and then at some point become a story. In 'Integration', I wanted to recreate all types of individuals and their own quirky ways of being. In a way, I wanted to say, yes these are all women, and they have their ways that are different from Bosnian men, but at the same time, there is no such thing as THE female experience. Also, since they’re all Muslim, I wanted to show there is no one way of being Muslim, not even within a small community of refugees.

The story about daughters and houses is something my grandma used to tell like some form of mantra, and since I grew up with her, things she taught me are the ones that still define me. In 'Integration', having sons is a curse for Aziza because in Srebrenica civilian men were basically exterminated.

AJ: The stories stand alone as individual pieces but when you read the full collection you get the feeling that they accrue - details build and we get a greater understanding of the worlds inhabited. Did you write each story knowing they would be part of a larger whole? 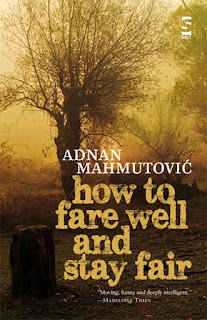 AM: Not consciously, but when you’re obsessed with a few things, they tend to recur, no matter how different a story is from another piece. I was surprised myself to see how they formed a whole. Even the one piece that has nothing to do with Bosnians, which I wrote for an anthology Stories for Japan, deals with the same themes.

AJ: There is a variety of styles in the collection. For instance, 'What We Talk About When We Talk About Suicide' is in the form of a series of online chat rooms; 'Vacation: A Travelogue' is in the form of diary entries for each day of the week; 'Consultation With Oxford English Dictionary' is a very short piece showing the dictionary entries for three words. I think these work really well together. Did you deliberately want to try a number of styles when writing the collection?

AM: I did, yes. The thing is when I started writing I noticed that my style varied from story to story, and that caused me some anxiety. Raymond Chandler said that the best investment a writer can make is to create one style. That may be true, but I’ve been drawn to writers and artists who changed styles over time. Style became something proper to the story they were telling, rather than imposed on the material. So I stopped worrying and learnt to love my changeability. I feel that in order to paint these realities, I had to approach them from different sides. This works, I guess, because the stories are circling about some common nucleus.

AJ: The story 'First Day of Night' is excellent and one of my favourite stories of recent times. Can you tell me a little more about how it was written and the inspiration behind it?
AM: I already had a few stories following Almasa. Chronologically, 'Integration' comes after, but it was the first story I wrote. 'First Day of Night' was an attempt to just follow the character as a free agent, so to say. What I mean is that I often worked with bigger ideas in mind, like rape in '[Refuge]e', which originally had a fancy title in French. Often my stories are a combination of a more intellectual attitude, and an attention to those raw intimacies I mentioned earlier. I do like that, no doubt. But in this story I wanted to see what would happen to Almasa if she were released from that awful burden of representing Bosnia, women, refugees, etc. Still, this happens. As a refugee, she is defined by that discourse, no matter how much she hates it. I feel that in 'First Day of Night' Almasa finds some freedom from that.

AJ: A few of the stories make passing reference to comic book characters such as Rogue, the Silver Surfer and Superman. Are you a huge comic book fan?
AM: Yep. Big time. The image of the twin crescent moons, which keeps coming back in all my work, is stolen from the Italian comic Corto Maltese. I use it a lot in my novel. There are many other things. I’m the kind of geek who gets all the references in Junot Diaz’s book. I’ll tell you something I haven’t told anyone, the night before we left Bosnia, my greatest worry was not whether or not we’d get killed. I kept thinking what would happen to my comic book collection. I brought with me a few essential books without which I thought refugee life would be unbearable. I know it sounds weird, but when I found out we were going to end up in Sweden I was suddenly happy because I thought I’d be able to find all those comics I’ve only heard about, the legendary stuff that never made its way down to the Balkans. First weeks in the refugee camp in this windy town Uddevalla, I went on a prowl for a comic book shop. I had no money. And even if I could buy some, I didn’t know the language. That’s the definition of torture.

AJ: What are you currently working on?

AM: I have a draft of a novel, which is not about Bosnians at all, but it’ll need a lot more work. While that ms is shelved, I’m working on creative non-fiction. I wrote an autobiographical piece for World Literature Today, and since I didn’t get any bashing for it at home, I feel brave enough to do a few more.

* Visit Adnan's website here and buy the collection from Salt here.
Posted by A. J. Ashworth at 20:15