The woman who sniffs books

You might have heard of 'cooking the books' but have you heard of 'smelling the books'? Well, apparently, this is just the kind of thing Rachael Morrison likes to do. 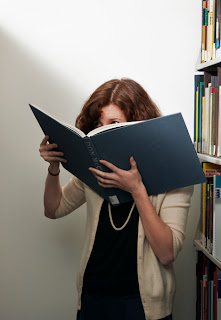 I first heard about Rachael, a senior library assistant at The Museum of Modern Art Library (MoMA), in an episode of Alan Yentob's arts programme 'Imagine'. In the programme, she explained that she is hoping to sniff every book in the MoMA Library collection and document what each one smells like - recording her findings in a ledger.

The book sniffing challenge, though, is not part of her day job - Rachael is also an artist. What she's actually doing, alongside her regular work, is creating a piece of performance art called 'Smelling the Books'.

In an article on the MoMA blog, Rachael says this 'personal olfactory exploration is to foster a discussion of the future of print media, the ways we read, methods of classification, and the way in which smell is entwined with memory.'

So far she has managed to sniff her way through a few of the 300,000 books she plans to. But she's already documented a surprising range of smells - anything from nail polish, sun tan lotion and dirty socks to smoke, late summer rain and armpit.
Posted by A. J. Ashworth at 19:36